Widow of bus crash victim: ‘I just hope the investigation results in arrests’ 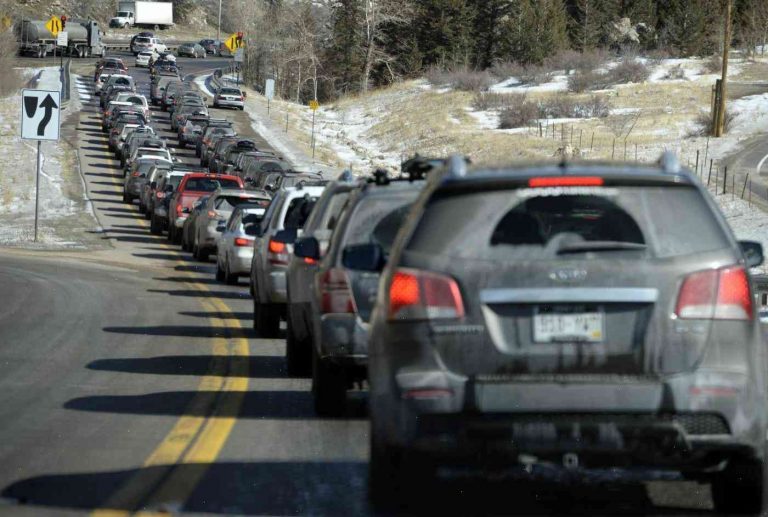 Traffic jams snaked for blocks in both directions on northbound and southbound I-70, a multi-lane corridor that runs through west-end neighborhoods, over mountains and into the suburbs of Colorado.

Road crews worked through the night to clear the scene, making the roadway passable for only one lane to the day. Most lanes were back open by Sunday morning, though residual delays were expected throughout the day.

Officials announced Saturday night that all lanes were reopened in time for the rush hour.

The accident happened just before 9 p.m. PT Saturday in Wheat Ridge, about 15 miles northeast of Denver.

The Wheat Ridge Fire Department says a truck driver was fatally injured after the bus jumped the median and struck another semi-truck head-on.

No information about the driver was available Sunday. A spokeswoman for Valero, which owns the bus, did not respond to an email or phone call seeking comment.

According to Wheat Ridge police, traffic was stopped for a previous accident when the bus slammed into the first tractor-trailer, briefly derailing a semi-truck next to it. The bus then slammed into a third semi-truck.

“A motorist driving southbound on West 58th Avenue noticed vehicles in the median and reported a bus in the middle of the road,” police said. “This caused the congestion on West 58th.”

At least five more people were transported to area hospitals with minor injuries, police said. An investigation into the crash is ongoing.

“I think it’s going to take a while,” Wheat Ridge Sgt. John Kaufmann told CNN affiliate KMGH. “It’s just just very, very serious, especially when you have an empty bus with injuries going southbound into the intersection. I’m just very concerned that there could be additional victims found.”

A total of 27 vehicles, including a school bus, were involved in the chain-reaction crashes, authorities said.

Authorities closed all lanes of both the northbound and southbound sections of I-70 for several hours. An afternoon travel time of about 5 miles went up to nearly 60 miles.

Most lanes were reopened by 9 a.m. PT, but with residual delays. The local lanes of the highway remained open, but some delays were expected, according to police.

The eastbound lanes remained open, but there were delays during the morning rush hour, according to police.

Valero’s bus fleet has a respectable safety record. It’s busiest days are not during busy times, company spokesman Bob Young said. There have been no serious accidents in the past five years, he said.

‘Miraculous’ no one killed

The bus was transporting about 20 passengers from Denver to Nebraska when the crash occurred, Young said.

“We’ve been here 12 years and this is the first serious accident we’ve had,” he said. “I can’t imagine how lucky our drivers are not to have been killed.”

Investigators were still trying to determine what caused the crash, but there were some early suspicions.

“We think that (the crash) involved tires,” Kaufmann said. “There was an axle issue with the tires that may have contributed to the failure of the axle, or turned off the tire when it was struck.”

What’s also unknown is how fast the bus was going.

Alan Paller, the inventor of a cybersecurity tool, has died