Reuters An aerial view of the parade, which had been due to take place on Saturday. NBC News: Every year the Salvation Army opens a store in Waukesha, a city in western Wisconsin. It’s… 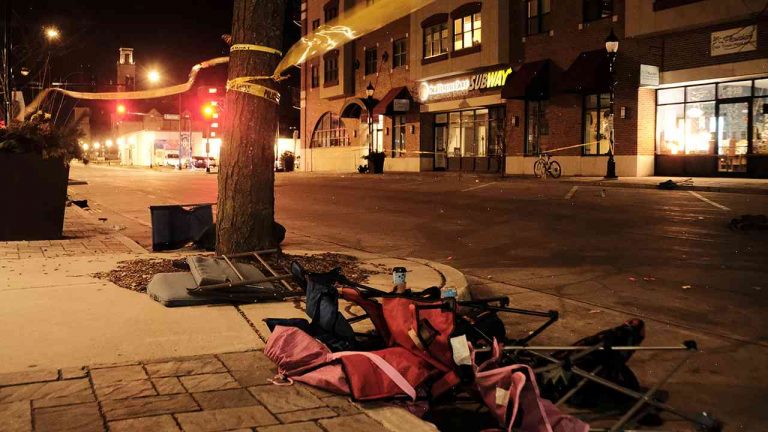 Reuters An aerial view of the parade, which had been due to take place on Saturday.

NBC News: Every year the Salvation Army opens a store in Waukesha, a city in western Wisconsin. It’s a public show of support during the holidays.

But now an affiliate of the conservative Milwaukee Journal Sentinel newspaper alleges that that’s all going to end. According to the newspaper’s report, the Salvation Army in Waukesha has received the lowest donation numbers of any Salvation Army in Wisconsin.

According to NBC, Lieutenant Colonel Terry Wolff, executive director of the Salvation Army Wisconsin Valley Division, said those totals don’t include other miscellaneous government funds in the city that help the charity operate.

But a private citizen said that after the the newspaper ran its report, the city manager cancelled the city’s $3,600 annual sponsorship of the parade. According to the newspaper, that’s because some – though not all – of the parade’s proceeds go to the Salvation Army.

And the mayor of Waukesha, Shawn Reilly, says the Salvation Army actually paid for the title sponsor’s portion of the parade.

All of that means the Salvation Army plans to close its local location next year.

Reid Goldstein, a police union member in Waukesha, has confirmed those same three city dollars go to the Salvation Army. He called the newspaper’s article “misleading,” and says that a closing of the Salvation Army’s fundraising operation doesn’t mean the charity is closing.

“I believe that was an effort to cause some disruption in the midst of what had been a very successful season for fundraising for the Salvation Army,” Goldstein said.

But Captain Wolff says the results of the newspaper’s investigation show those numbers to be completely inaccurate. He says the Salvation Army sees 65,000 people a year during its annual community outreach. And that averages out to 30,000 community members who visit its Angel Tree on a volunteer basis. That’s about 90 people a day.

“The only community support we’re going to lose is those volunteers that come to us with second homes and do their own work on their own time as part of their local volunteer work groups,” he said.

The Salvation Army’s mission, Wolff said, is not to raise money but to help people in need. He said the media coverage has lost sight of that mission and focused on numbers instead.

“There’s no question that the work of our Angel Tree is significant,” he said. “But it’s not a massive source of our revenues…that’s why, in any event, we’re looking to sell our building and go forward. But that has been blown out of proportion.”

Wolff said the Salvation Army is in the process of selling the building in its current location and that they’ve already received four bids.

The paper said the threat included a four page pamphlet posted with a handwritten message reading, “I’m going to kill all of you if you turn that building over to the Salvation Army.”

Officials said that on Saturday at 2:45am, a police officer at the entrance to the building noticed the handwritten letter and someone acting suspiciously around the boxes. That’s when the officer called for backup. When the three police officers arrived, the person was allegedly placed into handcuffs and taken to the police station for further investigation.

The person was identified as Candice Abbott, the Waukesha city manager, according to the sheriff’s department. They said that’s how the union officials decided to come forward.

On Tuesday, Abbott, the man at the center of the probe, posted a statement on her Facebook page in which she said: “I apologize for the actions of an individual at the Salvation Army facility that morning.”

She said, “With the records that I have, it is my honest and sincere hope that there were no threats whatsoever made to victims or employees in the Salvation Army building.”

The state department of justice will be charged with the investigation because the incident happened in a public building.