Harry Potter mural made from original David Mirvish original keeps growing around the home of this D.C. couple 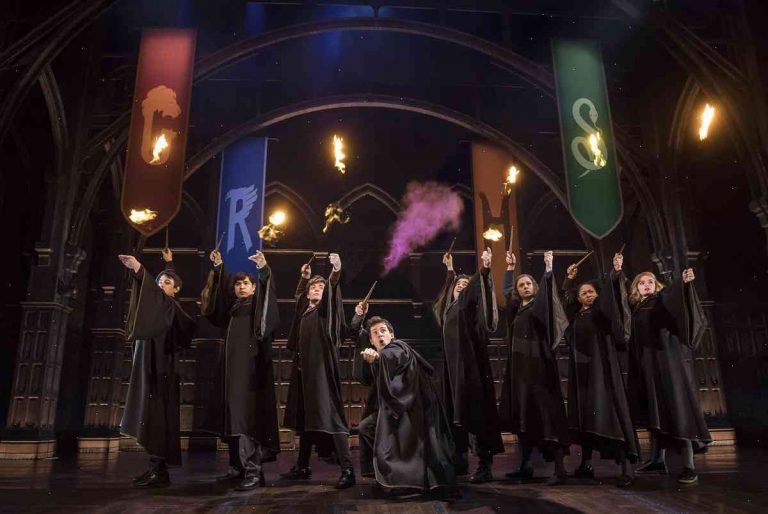 Barry and Jane Marsden of Arlington are pretty stoked over the way that the living room at their home became a magical “The Cursed Child” mural that hearkens back to their favorite “Harry Potter” characters.

When David Mirvish, a native of Ireland who moved to D.C. 30 years ago, first found out that the next stage of the “Harry Potter” saga would be written in London, he made an immediate decision to donate half of his belongings to the District’s non-profit cultural organization DonorsChoose.org, which helps students in underserved schools across the country get the arts-related supplies they need to continue their studies and express themselves creatively.

Mirvish was captivated with the myriad of creative activities that people had suggested for the children’s initiative, but when the Marsdens gave the Irishman directions to their home, he remembered seeing in “Harry Potter and the Sorcerer’s Stone” a reference to their childhood, so he made his way to the following home address: 25130 Bladensburg Rd. NE.

“The way the kids painted the front door and the front picture window was absolutely stunning,” Mirvish recalled. “They went nuts over it and they handed it over to me.”

Then Mirvish came across a promise from the Marsdens that they’d be mover-uppers and that they’d soon be moving to his new home in the country. He took his leave and a few days later was back on the doorstep of the Marsdens’ home. Mirvish created a few details to fit in with the iconic Gringotts bank mural, including a replacement of the entranceway’s glass and a “Harry Potter” mural painted into the wall of the back door.

“I was pretty excited,” Mirvish said. “I remembered the way that the mural had been done when I came to the house 30 years before.”

Mirvish has been politically active since he was a teenager, advocating for changes to the Irish and British legal systems, labor, public health and the environment. In D.C., Mirvish is the President of the D.C. Irish and Allied Congregations Council and works at Capital Business Development Association.

“I said to him, ‘My Harry Potter house is sorted,’” Jane Marsden said.

The entire front wall of the house has been painstakingly painted with the Harry Potter flair that Mirvish is known for, along with the inclusion of four excellent paintings of magical action in London. Mirvish and the Marsdens can’t stop talking about their experience and sharing their love of this magical property with everyone they meet.

Credit card opened? Here’s how you can benefit from the extra credit