Brice Dawson was like most senior Ontario nurses in 2013, when she retired with a base salary of $77,000. But as she approached retirement age, she and her colleagues faced a painful choice -… 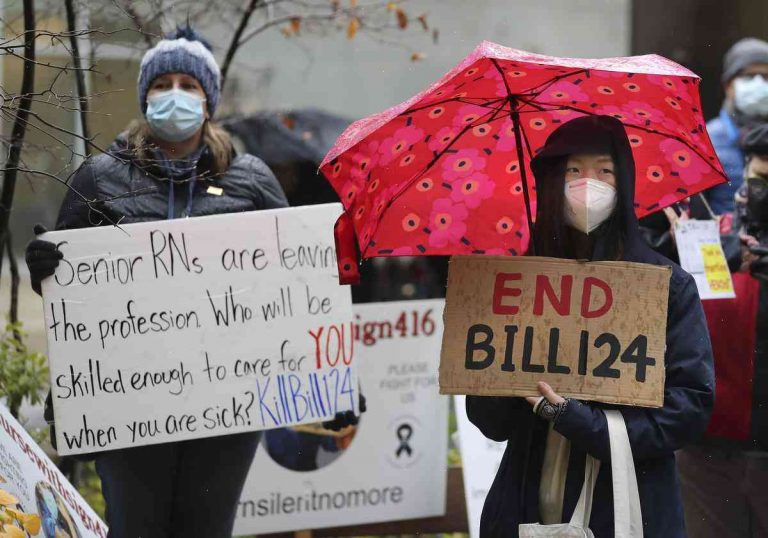 Brice Dawson was like most senior Ontario nurses in 2013, when she retired with a base salary of $77,000. But as she approached retirement age, she and her colleagues faced a painful choice – work for less while accruing thousands of unused sick days, or quit and make that gap up elsewhere.

“I went into the huddle and I said, ‘What do you think I should do?'” says Dawson, a registered nurse at a clinic in Kitchener, Ontario. “We were close to joining a retirees’ group. The nurses who had retired said if we can manage the money we earn through earnings and pensions and pension plan, we should be able to manage our time too.”

Half of Ontario’s senior nurses received less than the $59,000 required by the Retirement Income Security Act and Employer Pension Plan. (A 2015 Lora Kaplan-Matthies study found that 15.7% of Ontario-based senior nurses didn’t earn enough to meet their retirement income needs, based on the Premier Kathleen Wynne’s target median annual earnings of $76,500. It’s unclear how many receive base pay of less than that.)

Are we as a society right to insist that senior nurses work more hours, even if they’re no longer able to contribute to society by spending time with patients?

That brought them to the doorstep of the Ontario Nurses’ Association (ONA), the union that represents 50,000 Ontario nurses. In November 2013, nurse executives from across the province met for their first senior nurses meeting, with the goal of coming up with more affordable pay strategies. But the standoff continued, with ONA leaders claiming that a significant group of nurses were leaving Ontario to seek work elsewhere because of declining pay.

The year before, political pressure had resulted in the implementation of a five-year fixed wage schedule for nurses, which in practice meant they received a raise in a lump sum payment and another in their salaries next year. It was deemed to be so efficient that Ontario’s auditor general, Bonnie Lysyk, found that its immediate effects would provide no “modest benefit to nurses” while failing to account for inflation and leaving vulnerable groups like the homeless worse off.

THE BRONZE CIRCLE: Bruce Musgrave, then the president of the ONA, surveyed their executive members about their proposed reforms at a five-day senior nurses meeting on the evening of 30 November 2013. His proposed solution? A larger pay raise next year, larger raise in 2019 and a single increase in 2020. On average, each nurse—including non-nurses, such as secretaries and cooks—would receive an additional $2,492 in 2017, then $2,965 in 2018, $3,441 in 2019 and $3,504 in 2020. The five-year wage agreement also allowed the union to freeze the base rate of profit used to calculate fees nurses paid to board schools to train for their diplomas and higher-paid diplomas.

Former ONA president Bruce Musgrave says that the initial five-year deal to achieve some of the group’s proposals was a success, and that it took senior executives until October to run their plan by the new ONA board of directors, which turned their recommendations down and canceled the plan for 2017. “We thought we had a deal,” he recalls. “No one came to us and said, ‘Oh, you made this mistake. Thank you.’”

To fix the situation, Musgrave convened a senior nurses retreat to bring together union members at every stage of their career, the same week that the first hospital nurses started earning less than the $59,000 they were supposed to be compensated for under a previous contract.

A new senior nurses’ plan, as written by Musgrave and approved by the union’s board of directors, envisioned half of the proposed increases being implemented in 2017. The other half were to be spread out over the next five years, allowing time for the 4,000 members who didn’t earn enough to accrue sick days to compensate for those days, and for the province to meet its Queen’s Park mandate that nurses’ salaries be equivalent to those paid to those doing similar work in other countries.