A country driven deeper into crisis struggles to find peace as security forces detain journalists and opposition campaigners The military has taken over in Sudan. Here’s what happened The dramatic military takeover of Sudan’s… 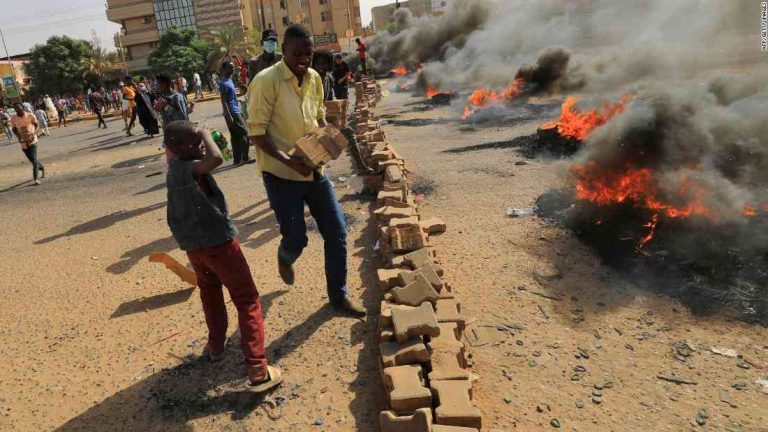 The dramatic military takeover of Sudan’s capital, Khartoum, left hundreds of thousands of people fearing for their safety. Sudanese authorities have detained dozens of opposition politicians, the Muslim Brotherhood, activists and journalists during the week. Among those in detention are Bashir’s chief ally Ahmed Haroun, who has been sentenced to death and along with his deputy, Ali Kushayb, faces new charges over their alleged involvement in the killing of around 1,000 Sadiq al-Mahdi supporters.

Security forces are detaining dozens of dissidents, activists and journalists in Khartoum during what has been described as the start of a crackdown on dissent. Bashir’s allies are also facing accusations of planning a coup. Sudanese Muslim Brotherhood leader Abdelhafiz Hafiz al-Nuri was charged with treason and corruption over his role in organising protests and has been placed under house arrest for the past two years. Those detained include a prominent Sudanese journalist with the US embassy in Khartoum who covered the dispersal of January’s protest march by the Sudanese Professionals Association.

Profile Sudan’s regime Show Hide Equatorial Guinea’s president, Teodoro Obiang Nguema Mbasogo, has held office for 38 years in a country whose flag and anthem are both derived from the Sudanese flag. That victory was secured after the rejection of repeated attempts to unseat him, thanks in part to his access to oil wealth.

Ahmed Haroun, jailed for life in absentia, has been a strong supporter of the protests and was facing charges of masterminding violence to prevent the death penalty being passed on “terrorist” leader Sadiq al-Mahdi and Sudanese opposition to Bashir’s rule. Haroun has denied the charges and was convicted in his absence of involvement in the murder of more than 1,000 Sadiq al-Mahdi supporters in Khartoum. He has remained in hiding since his arrest in 2016. Haroun’s brother, El-Sayed, was also detained on Friday in Khartoum.

Majd al-Shallal, a journalist with the Washington Post who has extensively reported on Sudanese protests, was arrested on Friday and is now being held.

In Sudan, the ruling party is looking for another target. Security forces are stopping and searching all vehicles and more than a dozen are now being held at a military facility in the centre of Khartoum. Opposition campaigners say a right to carry firearms has been loosened and human rights groups believe the armed forces are moving to secure power.

Nour Ayidi, editor-in-chief of the Sudanese al-Ahram newspaper, and Alaa al-Said, a senior editor at the London-based magazine al-Hayat, are among the journalists seized by authorities in the early hours of Friday morning, and held at two bases. Some journalists were allowed to leave a few hours later.

Sudan, long seen as one of the most stable African nations, is regularly criticised by human rights groups, which say it has one of the world’s highest rates of imprisonment for political dissent. Khartoum has often accused the US of “meddling” in its affairs.

The charge of treason against Haroun could mean he faces the death penalty – charges were dropped last month. Haroun has been released on bail once before.

Salah Baroudi, the editor of Agence France-Presse in Sudan, said the manner of the imposition of martial law underlines the increasing authority of the military and security apparatus in the country.

“The other big change now that martial law has been imposed is the fact that those who have been arrested have been denied access to their lawyers and in some cases the detention facilities have been sealed,” he said.