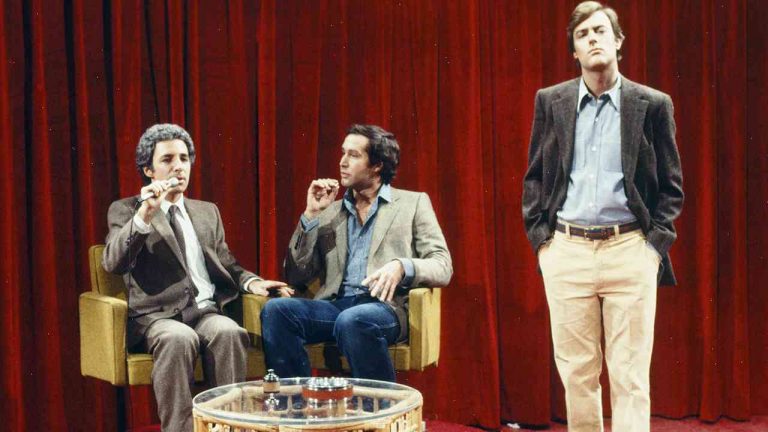 Comedian and actor Peter Aykroyd, who had roles in such classic films as Blues Brothers and Ghostbusters, has died at the age of 66.

Mr Aykroyd died following a stroke on Saturday night, with his family confirming the news on Twitter.

His debut appearance on comedy show Saturday Night Live was in 1976, making him the first non-member of the cast to ever be signed up.

He was a regular on the late-night sketch show for four years.

Mr Aykroyd starred in some of the most well-loved films of the 1970s, having stepped in to replace original cast member Dan Aykroyd who had quit the production.

He appeared alongside John Belushi in Blues Brothers, in which he played Jerry Dugan, the drummer with a ‘bandt’.

It also had an Oscar-winning theme tune, which also scored big on the charts, peaking at number two in the US singles chart and at number 26 in the UK charts.

His role in Ghostbusters as Ernie Hudson’s father-in-law was not dissimilar to his role in Blues Brothers.

For the first time in the show’s history, there were two cast members playing the lead roles in the film.

Later, his role in 1978 as Boris Karloff’s “good German” assistant played a pivotal part in the movie’s success.

It is the only movie to win all three Oscars on the technical categories – sound, cinematography and editing.

While in 2007, he appeared in The Wizard of Oz: Dorothy’s Return, as actor John Boorman, who played Ernie Dugan.

He then returned to Saturday Night Live to play himself in a 2011 episode.

Aykroyd, who was born in London and earned his first job on Jimmy Dean’s Country Boys in 1976, began his acting career on the radio.

He played at his uncle, father-in-law Alec Guinness, and became the leading man in his own radio soap opera, The River, a spin-off from Saturday Night Live.

Aykroyd had several guest roles on television before starring in the television series Pink Cadillac.

A decade later, after completing a Shakespeare training course, he produced and starred in The Restoration comedy Nana, which starred Sarah Miles.

He then made his movie debut as the farmer-turned-actor Alex J. Karras in Wayne’s World (1991), which famously parodied the 1970s TV series All in the Family.

In 1993, he starred alongside Michael Douglas in Ernie Kovacs, an homage to the pioneering comedy comic, with whom he formed a long friendship.

Aykroyd became an actor of note once again in 1998 when he was cast alongside Jeff Goldblum in The Natural.

For many, Aykroyd will be most remembered as the star of Ghostbusters.

In one scene he lost an eye on a remote New York summer camp and managed to reappear as the ghost of an alien.

He wrote and co-directed Ghostbusters with his partner Dan Aykroyd. It became the most successful film of the summer of ’80s, earning $268m worldwide.

He was given an OBE in 1995 and the same year received an honorary Doctor of Cinema degree from the University of British Columbia in Canada.

There are many tributes to the late Aykroyd on social media, including from his co-stars Bill Murray and Jean Dujardin.

To celebrate his film and comedy achievements, here are some of the comedy and drama in which he appeared over the years.

Saints Lose One And Win One? Stay Tuned